NO GARLIC NO ONIONS 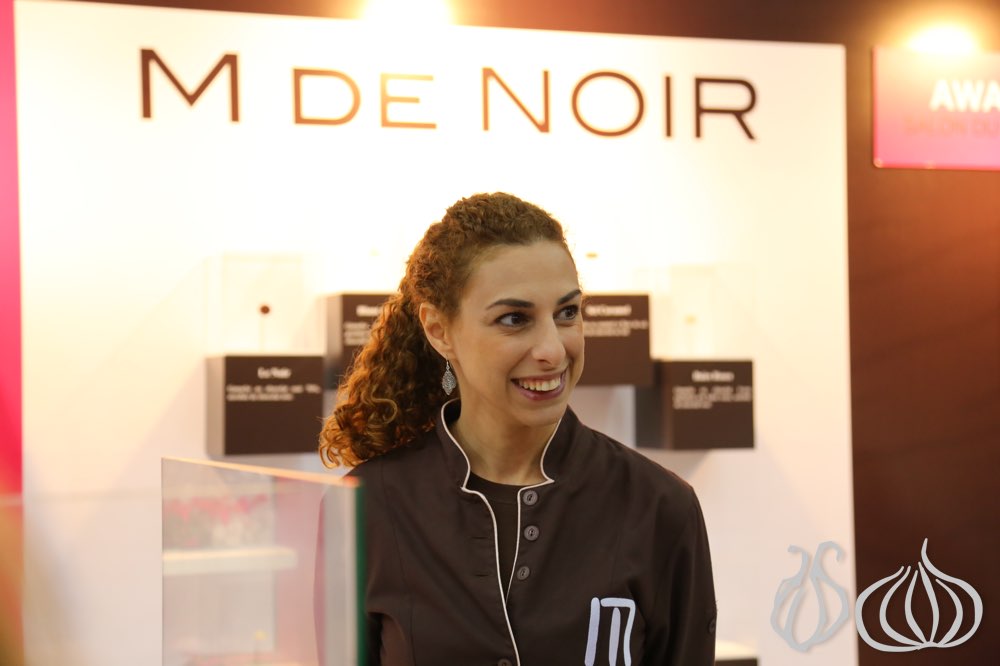 M DE NOIR: A LOCAL CHOCOLATE WITH HIGH, INTERNATIONAL STANDARDS
I remember receiving a box from M de Noir last year and I’ve often remembered that wonderful gift. My family and I agreed that M de Noir chocolate is special, full of flavor, yet often thought of as a bit expensive.
Walking around the aisles of The Cooking Festival and Le Salon du Chocolat, I felt the need to visit M de Noir again for a closer look at their creations. Believe me, this was not just any tasting. Allow me to tell you, honestly, M de Noir is the firmest local chocolate I’ve had to date in Lebanon. It’s not so much a chocolate you enjoy, but more of a chocolate that works within. The texture, the taste, the melting point… Ouf! It’s simply great.
Born from a flame that grew over the years, M de Noir offers an assortment of noble confections made with grand chocolates and opulent ingredients that are crafted with the utmost care. Having acquired the know-how at the prestigious schools of Ritz Escoffier and Valrhona, Maya Maalouf Kanaan invites refined and sophisticated gourmets to share her passion and melt in her unique universe of aromas and flavors.
M de Noir started in 2011, using the finest chocolate ever, Grands Crus, which Maya Maalouf Kanaan imports from Europe. After getting an MBA in marketing this passionate entrepreneur studied desserts and chocolate in Paris before participating in Le Salon du Chocolat in 2014, where she won an award, a grand prize that putt her in the 2015 guide “L’espoir Etranger”. She was also chosen as one of the 22 best international chocolates.
I was offered half a dozen choices to try, each made my heart skip a beat. Meske, margelaine, truffle arak, blanc Cointreau, salted caramel, baies rose, black salt…
Impressive: The finesse, the smoothness, the alcohol… The content, each step of the tasting experience was extraordinary!
Each trip starts as the little piece of chocolate melts on your tongue and you feel the quality and class of the chocolate, afterwards the aromas take over, preparing you for best bit. Alcohol or saltiness comes next, and your brain might well reel with the shock. Yes, it’s shocking! Anyway, you might think I’m exaggerating, so please go try them for yourself.
M de Noir reinforced my belief in this county’s potential for innovation, creativity and class. Maya Maalouf Kanaan has won the Club des Croqueurs du Chocolat’s “Espoir Etranger” award, conferred at the Salon du Chocolat in Paris on October 31, 2014. Maya is the very first chocolatier from the Middle-East to win such an award… and she deserves it.
http://www.nogarlicnoonions.com/m-de-noir-a-local-chocolate-with-high-international-standards/
Maya Kanaan In Press 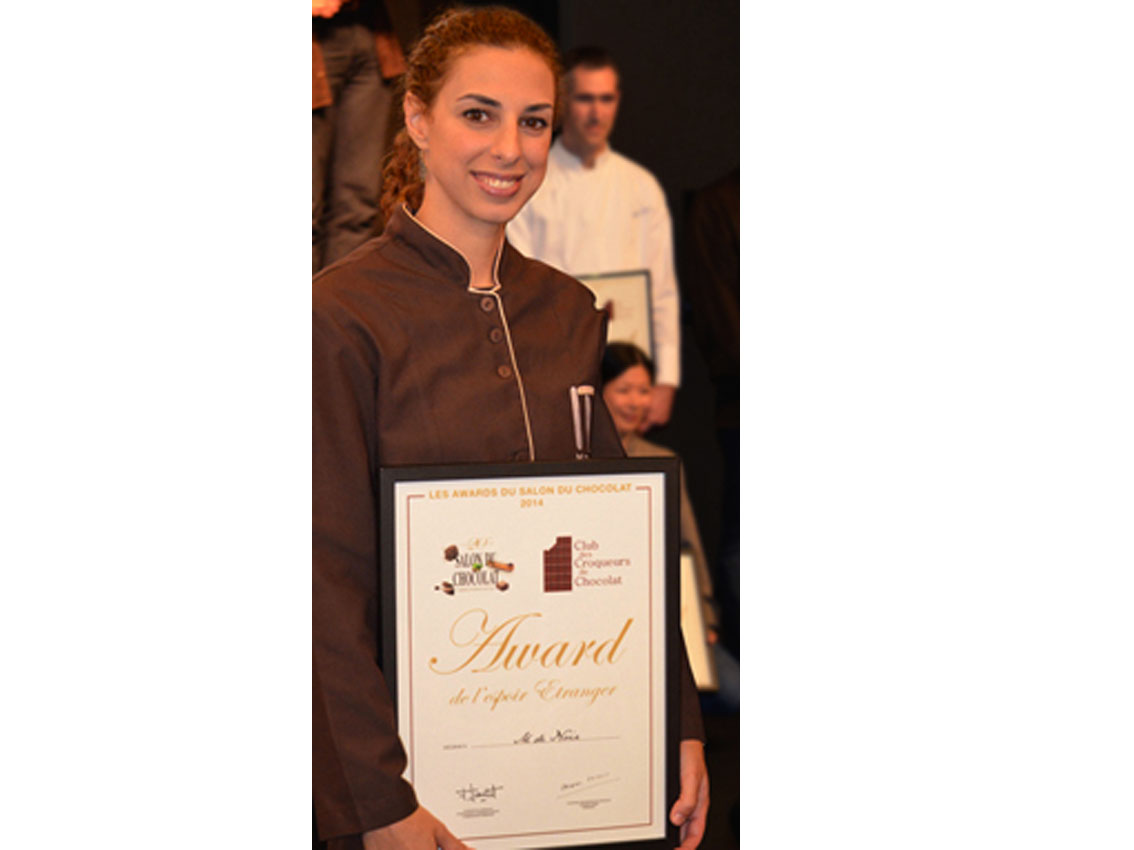 She was my marketing professor at the university when she asked in class if there were any students who would like to help her open her chocolate store; curious about this world, I said yes and started working with her immediately. Wearing her brown apron, she became a different kind of professor, the kind who teaches you about life, dreams and risks; who makes you realise that no matter how old you are, you could and should always pursue your true passion. And here I am, three years later, visiting the Salon du Chocolat in Paris, and finding her on a stage being honored with the “L’espoir Etranger” award among other renowned European and Asian pastry chefs. Her name is Maya Maalouf Kanaan, founder of “M de Noir”, a delicious chocolate atelier in Lebanon.

Maya started out in something else, marketing. She earned her MBA degree in the States, then worked at Impact BBDO in Beirut where she met her husband, the father of her two beautiful young daughters. She also taught marketing courses at the Lebanese American University for more than ten years, where I was one of her students. And then one day, after watching a TED video about someone who pursued his dream, she started questioning herself and decided to do the same and go after a passion she has long developed since her adolescent years, which was chocolate-making. Thus, she went to take a chocolate-making class in Paris at the Ritz Escoffier as well as a class in Valrhona few years ago. Once she finished her courses, she came back to Beirut and started making her own chocolate bonbons and truffles from home, but the demand started growing too fast, and having a real atelier became inevitable. And here’s how “M de Noir” chocolate atelier was born.

Inspired by the works of European pastry chefs like Pierre Hermé and Pierre Marcolini, “M de Noir” is known for its different chocolate offerings, filled with its homemade ganaches using Valrhona dark chocolate. But most importantly, unlike the rest of the Lebanese chocolate makers, M de Noir presents its chocolate naked and not wrapped, the European way. A fresh chocolate can’t be wrapped. Maya believes in greatness, and “greatness starts with the beans and the quality of the cocoa butter used to make the chocolate, the freshness and quality of the raw materials used to make the ganaches, and end with the know-how and the artisan’s own final touch”, she claimed. No additives whatsoever are used. She focuses a lot on the fait-maison aspect, i.e. she makes her ganaches, pate de fruits, ice creams from scratch using fresh cream, fresh milk, fresh fruits. That said, for every occasion, the brand offers new creations, example for Christmas, people await for its marrons glacés and chocolate truffles; for easter, people await for the “Demi de M” chocolate eggs. Ice cream was also one of M de Noir’s best-sellers this past summer.

After a long career in Marketing, her shift to pastry was remarkable. From preparing the desserts for her mother’s dinner parties as a teenager, Maya was able to raise the name of her chocolate brand “M de Noir” in the world and thus raise the name of Lebanon in the world of pastry, being the first Lebanese to win this award, noting that we have other big names in the industry in Beirut. Even though she didn’t expect winning an award on an international level, her belief in excellence, thoroughness and detail are what led her to the top. But now that she has won this prize, she feels more inspired to create new flavors and she is now more keen to enter the French market. “Les Saveurs du Liban“, the chocolate line she created for the Parisian chocolate fair, will now be available at Via Chocolat, 5 Rue Jean-Baptiste Pigalle, Paris 9, as of beginning of December. And as for the M de Noir shop in Lebanon, which is currently located in Biyada, Maya has plans to open soon another store in the heart of Beirut, hopefully.

After two months of closely working with her, I got to know Maya on a different level. The mother, the wife, the sister and the amazing chef. I could say that she is an exceptional woman, full of life, bright and smart. The risk she took to change her career and pursue what she truly loved was impressive, and we should all learn from that. And the proof is that barely three years later, her passionate love and hard work payed off. Here are two memorable things from my experience at M de Noir: I will never forget my first day of work, when I saw Maya drop a whole bucket of chocolate on the table and started twirling it left and right in order to adjust its temperature (as seen above). I was just amazed; it was like fulfilling my inner child’s wish. And I will also never fail to remember when we hosted a birthday at the atelier for an 8-year old girl, who had her friends over and they all started making their own chocolate tablets. You should have seen their bright eyes and their faces, simply unforgettable, as if they had been teleported into a Willy Wonka movie.

Today is the last day to check out the “M de Noir” booth at the Salon du Chocolat in Beirut, that is being held at the Biel Exhibition Hall. Don’t miss it!

In a nation where bad news is the rule and good news is the exception, one cannot help but start noticing a very interesting pattern.

While most (not to generalize) Bad News seem to be emanating from men (i.e. Minister vs Public Worker – The Smackdown), a growing number of Good News are coming from inspirational Lebanese Women.

In fact, we witnessed just recently 3 Lebanese Women make it to BBC’s top 100 list , Ms. Andraos as dean of Columbia University school of Architecture, and of course Ms. Alamuddin over shadowing George Clooney’s fame with her 5 Star LinkedIn CV.

Today, a new similar success story is making its way to the “grand public”; Maya Maalouf Kanaan, Lebanese chocolatier, has just been honored with the “L’espoir Etranger” award by the infamous Paris’ Salon du Chocolat.

Maya, San Francisco MBA graduate and former Marketing Teacher at the Lebanese American University, is the only Lebanese to have ever been awarded at this big annual event , and her boutique “M de Noir” is already on the columns of international and local newspapers such as Le Figaro and L’Orient Le Jour.

In her first interview after the awards ceremony, Maya spoke to Blog of the Boss about this big achievement:

When I decided to drop everything and work in chocolate, many people could not understand it. They couldn’t grasp someone leaving almost 2 decades of a career in Marketing, a well-seen position as a university instructor in a prominent university, to wear an apron and smudge my hands with chocolate all day everyday.

Today, I am doing what I love and I am lucky to have been praised for it. My 2 cents from my experience:

If you work very hard, and at the end of the day you are exhausted, you can’t feel your legs or neck or arms… but you are happy and complete; then you are in the right job. Even if following your dreams means more sacrifices on different levels, do it, because life is too short to waste on what we are supposed to do, or what we are used to do, or what others expect us to do, and not what we actually LOVE to do.

Always remember that there is no right age to follow one’s dream. I was 38 when I pursued my calling. For many, I was too old to start a new life, a new career. It is never too late no matter how old you are. As long as you have the energy and the will, whether you are 40 or 60 or 80, just go for it.

Finally a special word to women. The praise that I heard at the Salon du Chocolat in Paris and that was really dear to my heart, was that I was a Lebanese woman breaking through in a men’s world. Do not be scared to play on men’s turf, when women do excel, they beat men by far.

Thumbs up from Blog of the Boss to Maya and a call for action to our Lebanese society.

If this pattern proves to be correct and women are indeed the tank of oxygen that our country is surviving on, shouldn’t we all provide them with a fair system that can rank better than 8th worse in the world in terms of Gender Equality?

To congratulate Maya or for more details about “M De Noir”, click here to visit their Facebook page. 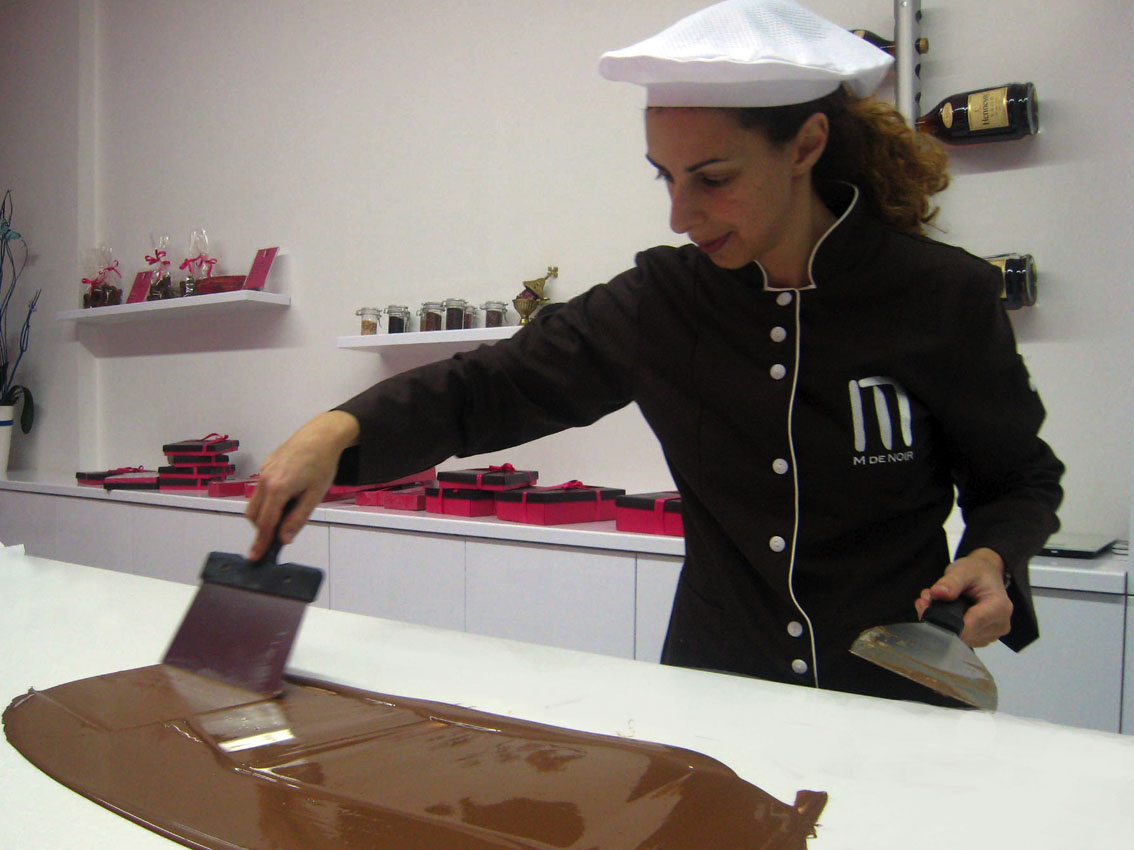 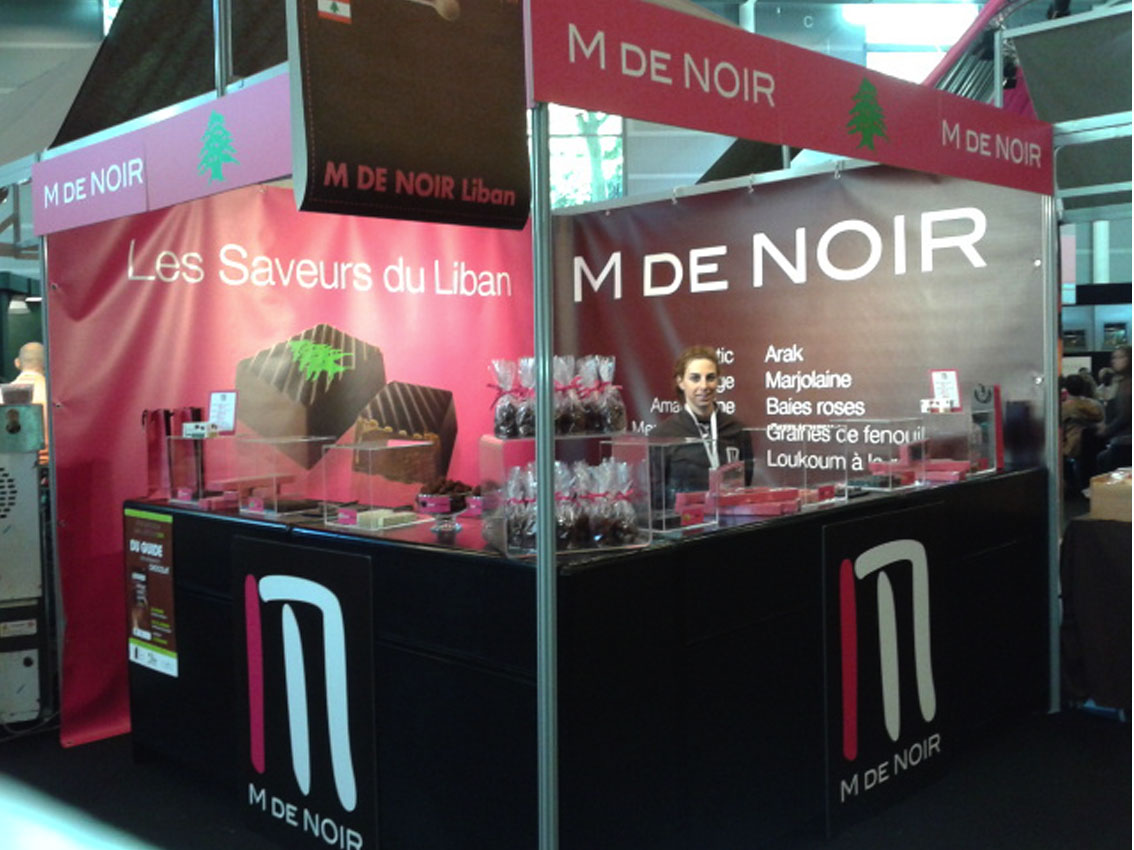 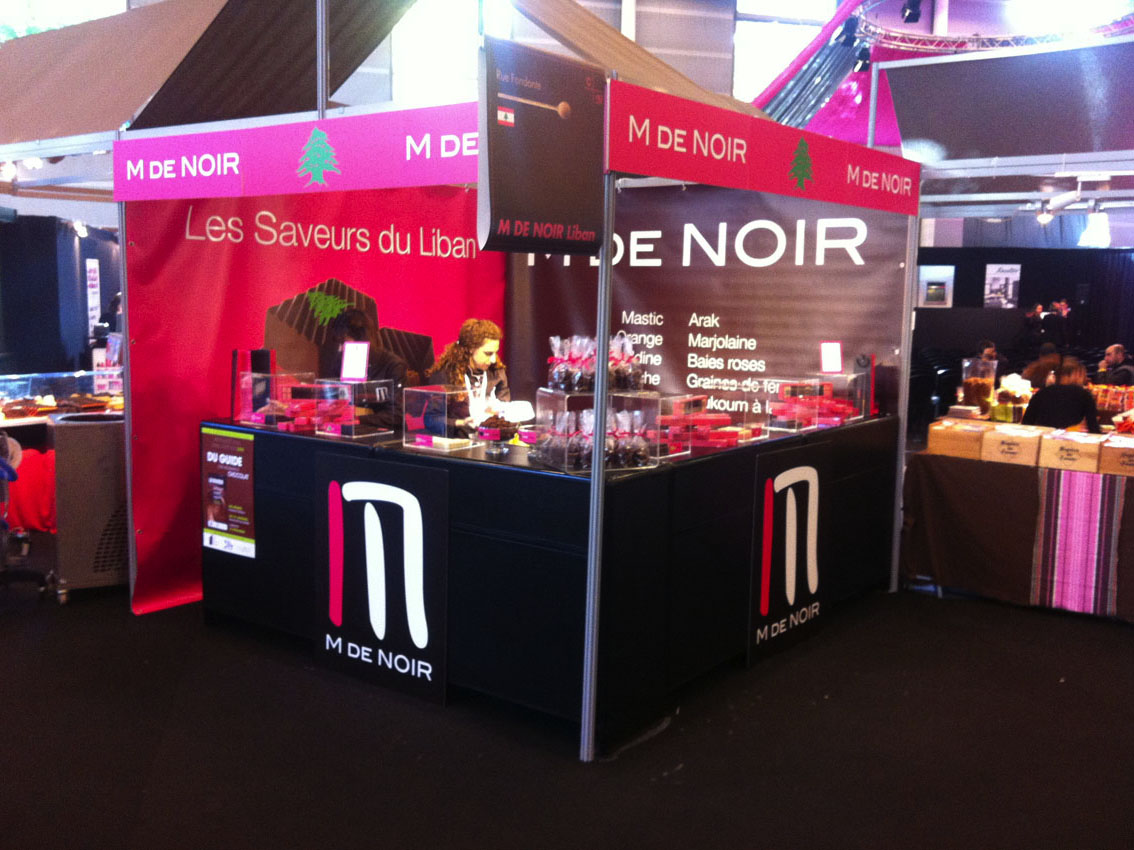 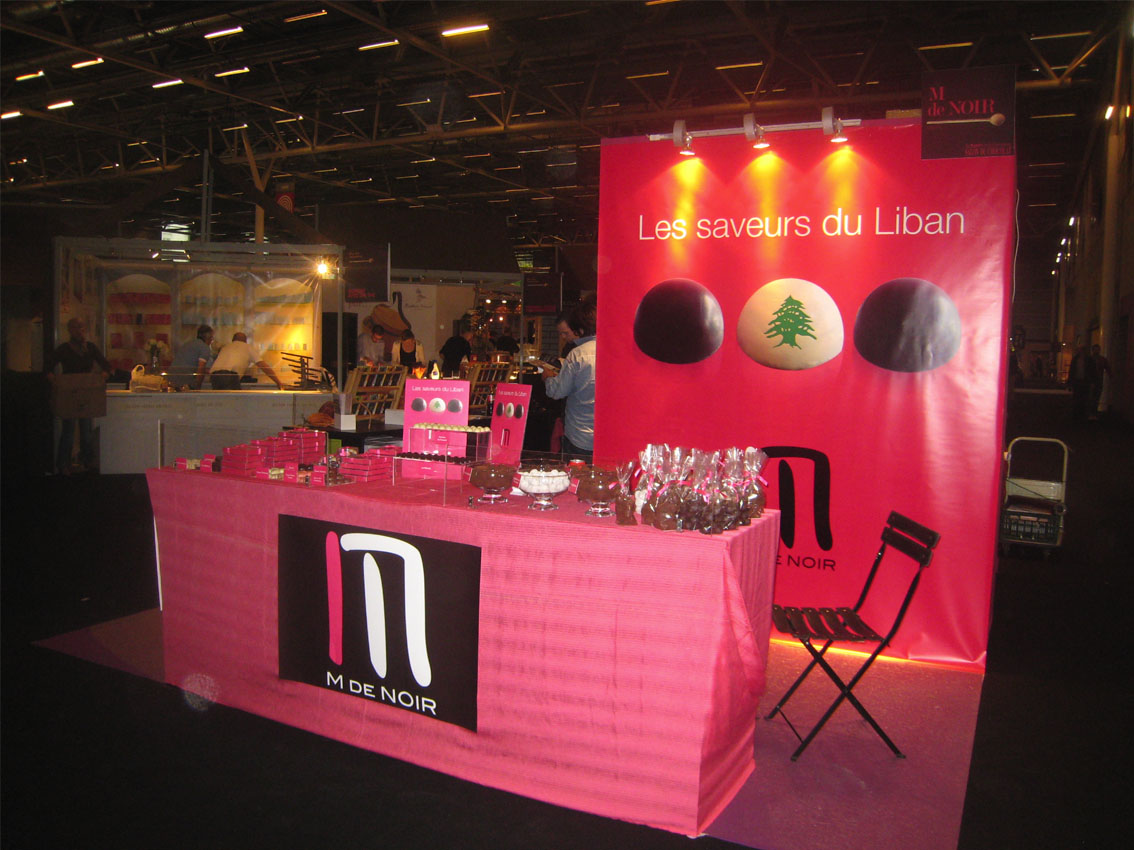 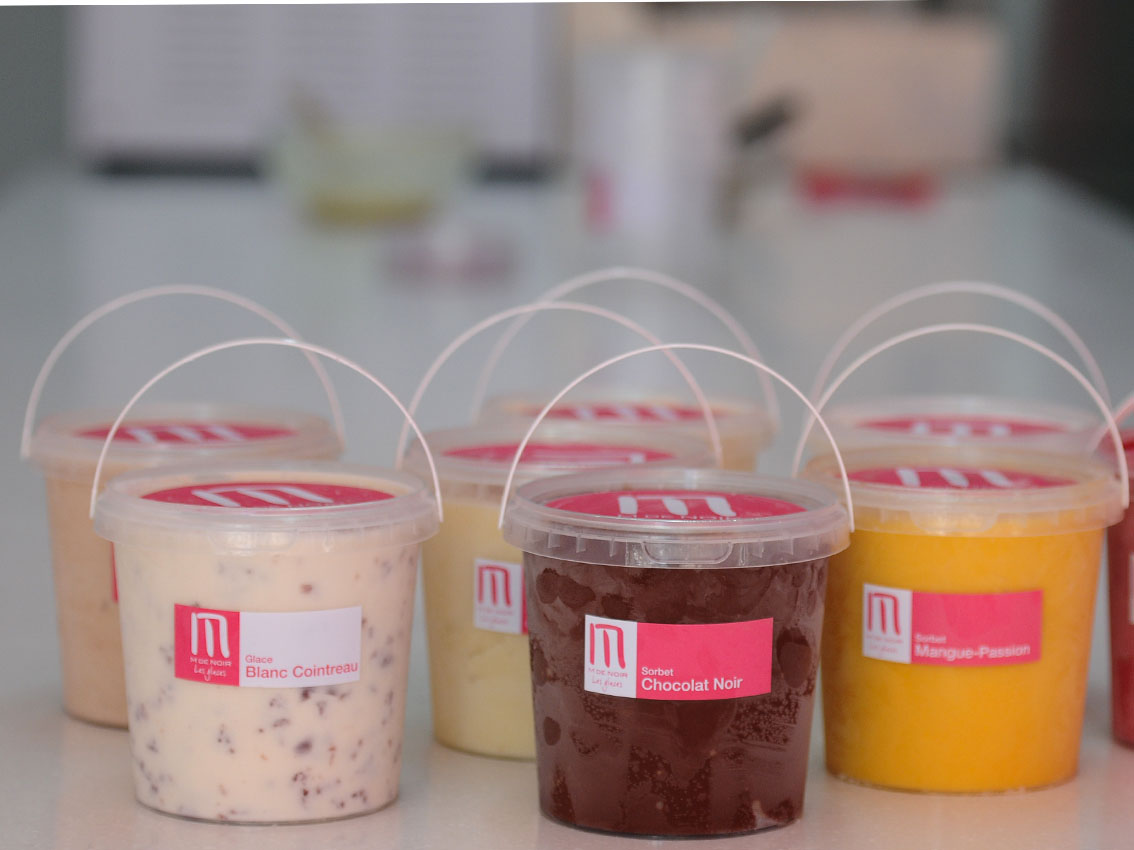 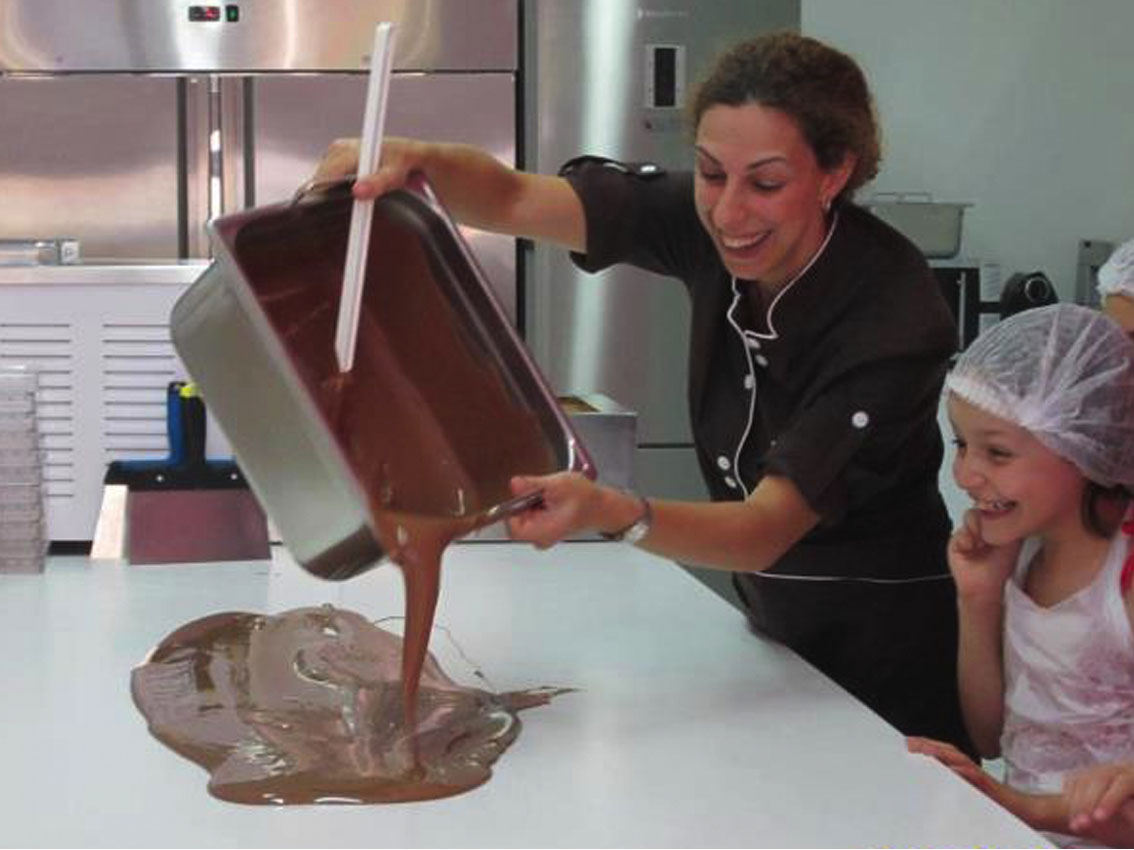